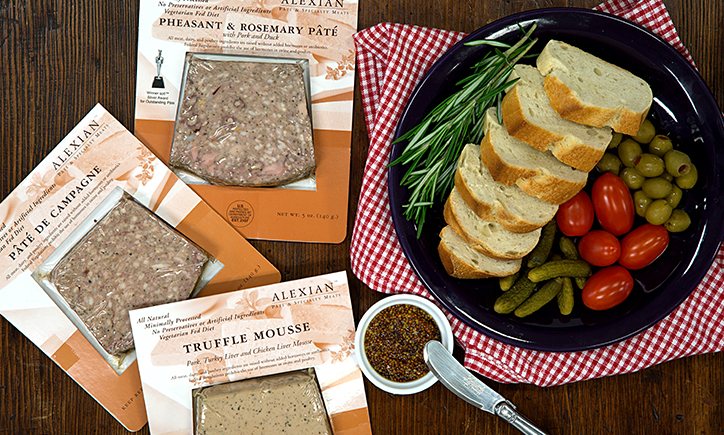 The word “Pâté” is a French word meaning “paste or spread” and is generally used to describe a cracker or bread accompaniment that is a baked mixture of ground pork, game or poultry meats and liver to which herbs, spices, and a wine, brandy or liquor are added. It has been made for centuries throughout central and northern Europe and is a staple of those cuisines today.

The pâté evolved as an economical and flavorful way to use all parts of the farm animal. It was the French who are credited with introducing more complex flavors and the classic country style pâtés such as the Pâté de Campagne, made of pork, onion, garlic, parsley and thyme. Pâté is produced in a loaf form and can be pre-sliced and vacuum packaged, sliced to order, or packaged in a small terrine. The “country style” or “coarse cut” genre is typically served as a slice or it is sliced and cubed and served with toothpicks.

The word “Mousse” is also a French word that refers to a sweet or savory spread that is finely ground, creamy, yet spreadable and of a whipped-like consistency. Unlike the coarse cut, it is always spread on bread or a cracker, or it is an ingredient that is spooned into another recipe. Both coarse cut and mousse pâtés can be found made of pork, chicken, duck, goose, and other ingredients. Alexian’s award winning Duck Liver Mousse with Cognac is our most popular mousse, followed by its runner up, the Truffle Mousse which is made with pork fat, turkey and chicken liver, truffles and generous helping of sherry.

While still in the charcuterie family but not quite classified as pâté, the French word “Rillette” typically describes pork or duck meat that is slow cooked in its own fat with a subtle blend of spices, so as to create a pulled, fall-apart, shredded texture.

It is spread on bread or crackers and is also used to make or enhance the flavor of other foods such as in a filling for pasta or a topping on a baked potato, for example.

It should also be kept in mind, that the liver in a pâté or mousse is not foie gras unless it is specifically described as foie gras. The term foie gras refers to the liver of a goose or duck that has been purposely fattened to achieve a desired level of richness and texture. Alexian does not use any foie gras.

Alternatively, Alexian’s vegetable and vegan pâtés are vegetable-based alternatives. They can be country style, or spreadable depending upon how they are made. They are a lighter alternative and more colorful than their meat-based counterparts, which makes them a great addition to your charcuterie board. We recommend Alexian Vegetable Pâté, Eggplant with Goat Cheese, and Mushroom Artichoke, which can be sliced to serve and enjoyed with a fork!